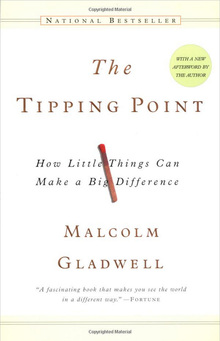 The Tipping Point – How Little Things Can Make a Big Difference.

​This book by Malcolm Gladwell is one of my favorites.  In addition to writing books, Gladwell has been a staff writer for The New Yorker since 1996.  He is one of my favorite authors because of his ability to initiate a story from a left brain logical beginning and then creatively engage the right hemisphere of the brain as the story develops.  I think of it as an ability to story tell and effortlessly switch between masculine and feminine perspectives.  A tendency he has is to find obscure research, expand upon it and apply it to a myriad of topics and events.
In this book he defines ‘the tipping point’ as the moment of critical mass, the threshold, the boiling point and its relation to how social change and progress unfolds.
​
– Think a new health & wellness paradigm –
Gladwell describes three rules of epidemics or ‘agents of change’.
He bases his description or theory on a couple of well-known phenomena.  The Pareto Principal or the 80/20 rule.  Essentially, 80 percent of the outcome is delivered by 20 percent of the participants.  Also he discusses the 1967 experiment by Dr Milgram who gave 160 Nebraska students a letter with instructions to get it to a stockbroker in Boston.  The study found it took an average of six links to deliver (six degrees of separation) every letter.  It was interesting to Gladwell that 3 friends of the broker connected over half of the letters.  This led to the consideration that certain types of people have rare social gifts, which he calls the law of the few.  Additionally, there are three rules of epidemics or transformation.
“The success of any kind of social epidemic is heavily dependent on the involvement of people with a particular and rare set of social gifts.”
– Think Chiropractors –

Law of the Few
Connectors –
These individuals know lots of people from a multitude of social, economic and professional groups and are in a habit of making introductions.  He has a fascinating story about Paul Revere and his well publicized ride announcing the arrival of the British.  He says another little known rider went in the opposite direction and nobody knows who it is.  Revere had an ability to go to each city or stop along the way and communicate to the right person who would subsequently relay the information more broadly.  He could ‘connect’ with people from many different social networks which led to his success.
Mavens –
Information specialists who connect us to new or deeper knowledge.  They have a depth of knowledge and they have a skill to share it with other people.  This type of person wants to solve problems with their depth of knowledge.
Sales People –
These are the persuasive types, they have tremendous negotiating skills that go beyond what they say. They tend to have an ability to mirror and innately read or respond to others body language.
Additionally, there are two other rules of epidemics or transformation.

​Stickiness Factor
The information and content must be memorable.  We must repeat the message regularly and often.  Example being a show like Sesame Street, that repeats the same episode for an entire week which enhances retention.

Power of Context
Human behavior is sensitive to and strongly influenced by its environment.  Gladwell states, “Epidemics are sensitive to the conditions and circumstances of the times and places in which they occur.”